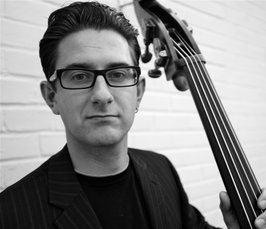 Tom is a versatile and acclaimed musician from the midlands. Encompassing 3 instruments and embracing an open minded appreciation for many styles of music and disciplines, he remains very busy and in demand regularly performing, recording, and teaching. Tom has performed worldwide with some of the most influencial artists of the 20th century; a highly accomplished musician comfortable and capable in any musical situation.

Tom graduated from Leeds College of Music in 2008 with a BA Hons in Jazz Studies (2.1). Studying under some of the country's most prestigious musicians, composers and arrangers, Tom gained vital theoretical expertise and stagecraft associated with performing in professional environments.

Tom's work takes him to Europe and beyond performing with rock'n'roll musician Mike Sanchez, country/rockabilly band The Drugstore Cowboys and many other ensembles from big band jazz to heavy rock. He has travelled the world performing and running band based music workshops on P&O cruise ships, and toured with many groups in the USA, Europe and in the UK. Comfortable playing jazz, blues, R&B, rock n roll, funk, latin, orchestral, rock, indie, folk, country, roots music etc whether on guitar, electric bass guitar or double bass, Tom can fit in and compliment any musicial application.

His passion for music on such a broad and open minded basis has led him to work with some of the key musicians who have shaped and influenced his music career to date and modern music as we know it. Namely the late jazz legend Johnny Dankworth, Led Zeppelin's Robert Plant, guitar virtuoso Jeff Beck, 40s/50s sax honker Big J Mcneely, 50's rock'n'roll legend Obie 'Young' Jessie to name but a few. Expect to hear smooth and accomplished playing from one of the midland's most highly regarded young professional musicians.