The Drugstore Cowboys are professional U.K powerhouse rockabilly/blues/country roots trio who draw influences from Rev Horton Heat, The Cramps, The Paladins & the Stray Cats. They blend it together, add a heavy dose of their own style and originality, and the result is an explosive rock'n'roll assault. With their vast repertoire and ability to adapt to any venue and audience, the Drugstore Cowboys are a firm favourite at festivals, venues and private functions across the UK, Europe, Scandinavia and the U.S.A.

The Drugstore Cowboys formed in 1998 in the midlands and have released 3 albums, 'Crash and Burn' under local label 'Raucous Records' and more recently 'Chop Poker' and 'All Tooled Up' on their own label, 'Smokin' Records.' All their albums feature a mix of original material and their own interpretations of true classics such as The Beatles' 'I've Just Seen A Face' and Guns 'n' Roses' 'Paradise City.'

The band personnel has altered a little over the last 16 years but has remained in it's present lineup since 2006 with guitarist Nick Whitfield, drummer Damon Clarridge and double bassist Tom Bull. The depth of experience and stagecraft expertise shines through in the present Drugstore Cowboys lineup making it the strongest to date. Both Tom and Nick are also band members of legendary piano ace and Big Town Playboys founder, Mike Sanchez. Tom and Nick swap instruments for this though as Tom is a fine guitarist and Nick is also an accomplished double bassist!! They also perform at prestigious concerts and festivals internationally as the Mike Sanchez Band, also having a long list of celebrity collaborations and extensive discography.

Recently the Drugstore Cowboys have performed at a number of festivals including Rockin' Race Jamboree (Torremolinos, Spain), Wozwolf bike fest, The Great Dorset Steam Fair, The Shakedown Fest, and were the finale band at 3 festivals, the Leicester Simon Says festival, The Hotrod Hayride #10 and Americana Fest (see YouTube clips below).

The Drugstore Cowboys are in high demand and taking bookings for 2016 and 2017, please call or email via the contact form for a competitive quote. 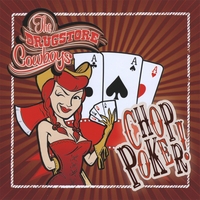 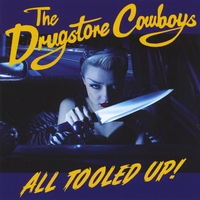